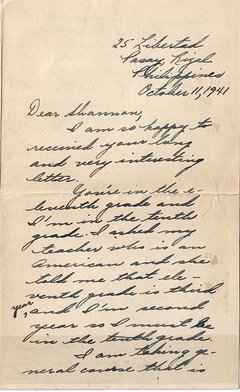 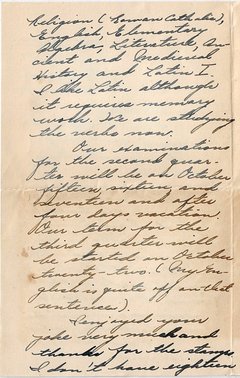 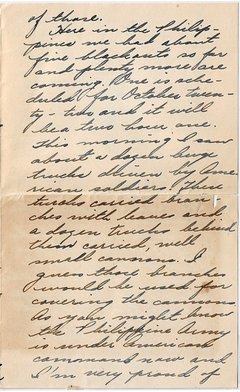 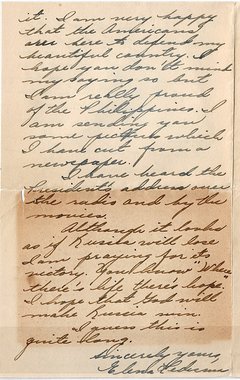 Shannon Jones had enclosed a letter from Mom, written when she was about 13 years old, with a fountain pen in a handwriting that could only hint at the elegant writing to come later. The note is fragile, yellow, tearing, with an envelope with Philippine Commonwealth stamps. It took about a month to reach him in Texas, on November 6, 1941.

I am so happy to received (sic) your long and very interesting letter.

I am taking general course that is Religion (Roman Catholic), English, Elementary Algebra, Literature, Ancient and Medieval History and Latin I. I like Latin although it requires memory work. We are studying the verbs now.

I enjoyed your joke very much and thanks for the stamps. I don't have eighteen of those.

Here in the Philippines we had about five blackouts so far and plenty more and coming. One is scheduled for October twenty-two and it will be a two hour one. This morning I saw about a dozen huge trucks driven by American soldiers. These trucks carried branches with leaves and a dozen trucks behind them carried, well small cannons. I guess those branches would be used for covering the cannons. As you mightknow the Philippine Army is under American command now and I'm very proud of it.

I am very happy that the Americans are here to defend my beautiful country. I hope you don't mind my saying so but I am really proud of the Philippines. I am sending you some pictures which I have cut from a newspaper.

I have heard the President's address over the radio and by the movies.

Although it looks as if Russia will lose I am praying for its victory. You know "Where there's life there's hope." I hope that God will make Russia win.

I guess this is quite long.

Mom had enclosed two newspaper photographs of the American soldiers preparing for war. What a find. How young she was, yet so nationalistic. How observant she was and her letter explains a bit her penchant for letter writing.